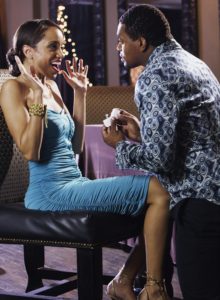 Q.  A year ago, my boyfriend finally proposed to me, but he didn’t have the money to buy me a ring, so he asked me to buy my own ring, and he would reimburse me later. Out of excitement and against my better judgment, I went out and bought a ring that I couldn’t really afford. Since that time, he called off the engagement and is refusing to reimburse me for the purchase of the ring.  I want to take him to court and try to get my money back, but everyone says I don’t have a case, and that I would look ridiculous.  What do you say?

A.  You can certainly try your luck in small claims court. You have nothing to lose, and you might have a case.  Meanwhile, I suggest you wear the ring, but don’t ignore or forget the lesson.

Q.  I met a woman online who lived in another state, and we began a long distance relationship with talks of marriage.  After seeing each other for about eight months, I decided to allow her to come and live with me.  She quit her job and moved here and it’s been hell ever since.  She can’t find a job and now that we’re living together, I can’t stand her.  She’s a slob, and I’m seriously bored with her company.  But I can’t get her to leave after telling her I’m no longer interested in getting married.  What can I do?

A.  Try to get a family member or friend to talk to her about getting on with her life.  Rejection can sometimes be hard to take, and you are in a precarious position.  However, if intervention doesn’t work, and she still refuses to leave,  you should seek help from your local police department.