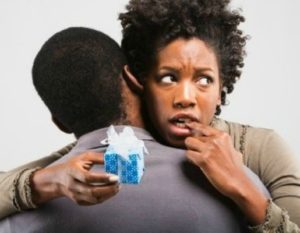 Q.  I had been hanging on in a relationship for over eight years waiting and praying for this guy to marry me, and he kept putting me off.  Finally, he proposed last month in a fancy restaurant and gave me a fancy ring, but it’s too late.  In fact, I’ve begun seeing someone else who treats me far better than he ever did.  Though my boyfriend took me for granted for years, I accepted the ring because I didn’t want to hurt his feelings.  I haven’t worn it since, and I don’t plan to.  I want to ship it back to him with a Dear John note, because I don’t wish to face him.  But my friends think it would be an awful thing to do.  What do you think?

A.  I think whatever way you return the ring will have a negative impact, but it must be done immediately if not sooner.  The grown-up way would be to tell him the truth, but I would leave out the part about the new guy.

Q.  I am a frustrated single mom trying to date while parenting, and every time I go out on a date, I have to pay for a babysitter. I need you to tell me if I’m crazy.  I think the guy should at least offer to pay for my babysitter, and I resent the fact that he doesn’t even ask.  Do you think I should express this sentiment to him?

A.   No.  I think you are responsible for all babysitting costs.  However, if the guy offers to pay, it’s a wonderful gesture, but it shouldn’t be expected.