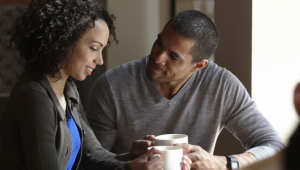 Merille: “My ego-driven cousin got conned by a “doctor” she met online, who swept her off her feet and proposed after two weeks of intense dating.  Supposedly, he’d relocated his “practice” from the West Coast. She became suspicious because he kept claiming that his money hadn’t been transferred to his bank, and she was footing all the dating expenses.  When I suggested she consider doing a background check, she resisted strongly because she saw it as an attack on her judgment.  However, when he disappeared for two days in her  new BMW, she hired a private investigator and discovered he had given her a fake name and was already married..”

Stephanie: “When a longtime boyfriend broke up with me and stated he preferred we remain friends, I bristled in anger.  I was insulted by his words because it seemed he was reducing what we had to nothing.  But, after I got over the disappointment and the feeling of rejection, I embraced the idea until I found out that he had begun dating my best friend.”

Nick: “I think the worst words a woman can use to shatter a man’s ego are…” but I hope we can be friends.” This usually comes either before a man has fulfilled his desire to be with the woman or after she has ended his role in her life.  When it happened to me, I was in the middle of proposing marriage to a woman and she expressed she would rather we became friends only.  I will never forget it because it made me an angry man for a long time. Every woman I met after my time with her paid dearly for her statement.”

Charli: “My ex-boyfriend was the world’s biggest liar.  One night I encountered him in a very public setting with a woman on his arm, and he ignored me completely when I confronted him and threatened to call security.  I walked away in stunned disbelief because I thought I was in a committed relationship.  Later that night, he called me at 2 am to explain that he was being blackmailed by the woman he was with for a mistake he had made in his youth.  He claimed that the only thing she wanted in return for her secrecy was for them to become a couple, and he had to play along until he figured out what to do.  I hung up and blocked his number.”