The Dating Chronicles – The Avenger 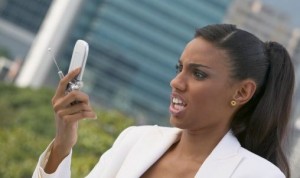 Marcie looked at her phone in disgust. She couldn’t believe that Hank had not called her.  This was the second time in a week he had stood her up and the fourth time in a month. He hadn’t called all evening.  It was 10 pm and he was supposed to pick her up at 8:00 to take her to dinner.

She thought about what he would say when he called.  He would call around 7:00 a.m. and give the excuse that he got caught up in a business meeting and got in too late to call.  Though he denied it, she knew he was seeing someone else, but she couldn’t prove it.

As she sat there seething in anger, she was reminded of how huge his ego was.  She decided to teach him a lesson by playing one of his games.  She knew him well and what he would respond to.  She was tired of him and ready to move on.

At midnight, she phoned him and left a message on his voicemail apologizing for forgetting about their date because of a last-minute business commitment.   Her phone rang ten minutes later.  It was Hank and he was angry.  “What do you mean, you forgot our date?  What is your problem?”   “Problem?” she asked, as she strained to contain herself.  “I don’t have a problem.  I just have a busy life.  As a matter of fact,  I’ve become too busy to be involved right now.  But I’ll get back to you.”

When she ended the call, she looked at her phone.  This time she was smiling.