The Dating Chronicles – The Fixer 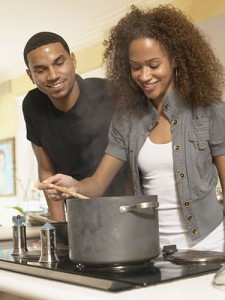 Glenda was being the perfect hostess as usual. Though she wasn’t dating anyone at the moment, she enjoyed throwing gatherings to hook up her friends with potential love-mates. This night she was busier than usual. Some had met and jelled, while others were still sorting it out.  Meanwhile, her friend Jeanie was complaining loudly about Glenda’s choice for her. Later, when the bell rang and a handsome stranger named Peter walked thru the door …he sailed into Glenda’s heart and Jeanie’s arms.

Unknowingly, he’d been invited by a mutual friend to meet Glenda, but before he could take off his coat, Jeanie was leading him by the hand and introducing him around as if she’d known him for years. Though discombobulated by Peter’s presence, Glenda continued to refresh drinks, and prepare plates, as if she had not been struck dumb by this good-looking guy.

For the first time since she’d known her, she resented Jeanie and her aggressive style, as she watched her monopolize the stranger. Glenda tried to maintain her hostess composure, but she was so nervous, she was shaking. She had never had a man affect her so, and she found it hard to concentrate on her other guests.

Suddenly, Glenda felt sorry for herself, as she tried to busy herself in the kitchen. She thought about how she was always matchmaking for her friends and no one had ever reciprocated. Suddenly, she was ready for the party to end, and for everyone to leave.  However, when Peter walked into the kitchen and began talking to her, she changed her mind. He ended up talking to her for the rest of the evening. He also stayed and helped clean up when everyone left.  Jeanie left in a huff still complaining, and for the first time in a while, Glenda went to bed tired, but happy.  A week later, she and Peter were dating and a year later, he proposed.  Jeanie hosted the engagement party.