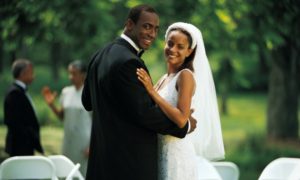 Q.  I just found out that my husband who I’ve been separated from for the last six months has married another woman, and we’re not divorced.  I found out by accident when a new co-worker was showing off photos from her cousin’s wedding, and there stood my husband as the groom.  I’m wondering if I should have him arrested for bigamy, or just divorce him.

A.  I think you should have him thrown in the slammer, and then you should divorce him.

Q.  My boyfriend of four years finally proposed to me on a Sunday, took it back on a Thursday, and asked for his ring back.  The following Tuesday, he proposed again, and explained his actions as “a case of cold feet.”  He returned the ring to me, and we began making plans.  The following Saturday, he called me at 3:00 a.m. and told me he had changed his mind again and he needed his ring back.  I refused, but my family thinks I should return the ring and be rid of him. I think I should keep it. What do you think?

A.  I think you should keep it and get rid of him.  In my opinion, the ring in no way compensates for the anguish he’s taken you through, but it’s not a bad consolation prize.