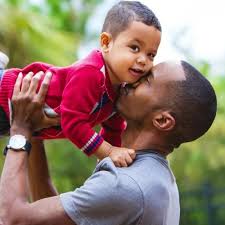 Last month, I attended a Father & Daughter banquet with my eleven-year-old daughter at her school and I was amazed at the number of African-American girls who were there without their dads and were accompanied by their grandfathers or uncles.  My daughter later told me that many of her classmates didn’t have fathers at home.

After we talked, I recalled my own childhood, and how my brother and I and another kid on my block were the only three boys in the entire neighborhood who had a visible connection with their fathers.  Everyone else was either being raised by their mother, who was a single parent, or a grandmother.

Though my parents were divorced, my dad picked my brother and me up every weekend faithfully.  I remember feeling proud as the other kids would stop playing and stare solemnly as we got into his car.  He was always there for us and I remember feeling special because of my father’s love and attention. His actions alone always made me very cognizant of the importance of having a father around and I made a vow to be the same kind of father when I became one.

Joy – “I remembered how it was growing up in the house without a father, and how my mother raised three boys alone.  We were so poor that we often went without food.  It was a common thing for my brother and me to steal snacks from the neighborhood grocery because we were hungry.”

Jay – “I’d been estranged from my daughter because her mother and I don’t get along.  However, I begin to feel so guilty that I made contact with my kid after having not seen her in over a year.”

Cheryl – “My father never gave our mother any child support, and whenever we’d call and ask him to help out with school expenses, he would laugh and claim to be broke.  Therefore, he never visited us or treated us like his children, until he got old and sick.  Suddenly, he wanted us around him, and none of us went to see him.  His wife told us that he died with a broken heart, but I felt no pity for him because I had lived with one for years.”

Chloe – “When I was a young boy I ached for my father to be there with us, and he was nowhere on the scene.  I remember every time my mother got a new boyfriend, I was so anxious to have a dad, that I would instantly begin calling the guy daddy.  I was starved for a man’s attention and I ended up being sexually molested by a “family friend” who took advantage of my need for male involvement in my life.”

Karl – “I am proud to say that I had the best dad in the world, but I felt rich among my friends growing up because I was the only kid on my block with a father in the home.  I am glad to see your magazine print an article that will hopefully provoke more fathers to be connected to their children.  Children desperately need their dads, and I believe fatherless boys contribute more to the crime in our society than anyone.”

Shayla – “My father denied that we were his children, (there were two of us) because he hated my mother.  It didn’t matter that we looked just like him.  We weren’t important to him and his treatment of us really damaged my brother emotionally.”