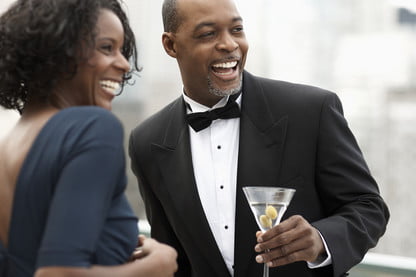 Jim was a successful real estate developer, who made it a point to attend all the important parties.  As he entered the posh cocktail party up in The Hills, he scanned the crowd for the usual VIPS.  He shook his head in disgust when he saw his friend Greg, a prominent attorney coming thru the gate.  He was often embarrassed when Greg showed up on the social scene not dressed for the occasion, with a woman who usually looked to be of low caliber.  Unlike Jim, Greg wasn’t into appearances.

On this day, they were at the spacious home of one of their college buddies who enjoyed the successful life of an eye surgeon.  The crowd was immense in the hot sun, as cocktails were served poolside by uniformed waiters.  Like most in attendance, Jim was dressed in chic designer wear, as was his date, a stately model.  However, Greg and his date, on the other hand, were dressed in torn jeans and tank tops.  When he saw them approaching, he frowned as he braced himself for another encounter with one of Greg’s ditzy dates, but he wasn’t prepared for the close-up view.

Greg’s date had light brown eyes that sparkled brightly against her dark brown skin and her smile sent tingles down Jim’s spine.  She was the prettiest woman there and for the first time, Jim had sudden respect for Greg’s taste in women.

He watched her for a while after the introductions were made and her animated expressions struck him as cultured and refined.  She was warm and comfortable with herself as she stood in the midst of Greg’s popularity, as others came over to greet them. He could tell from the way she moved that she was just as comfortable in a dress as she was in jeans and he knew he had to have her.  From the way she looked, he knew Greg wasn’t really her type.  In Jim’s mind, though Greg was financially attractive with a new red Porsche and an expensive condo, his beer belly, and high-top red sneakers somehow squashed the picture of his success as an attorney.

He decided to approach her when he saw Greg go to the bar.  He stepped up behind her and slipped his card in her hand and whispered in her ear. “Call me if you wish to squeeze more excitement into your life.” He walked back to join his date with a smile on his face.  He knew she would call.  After all, he had the look to go with his success.