The Tell-Tale Signs Of An Unscarred Soul 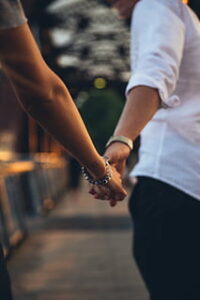 My friend’s good looks and charisma are so striking that whenever he walks into a room, both men and women turned to stare.   I’ve witnessed women of all shapes and sizes hang off the rafters with bated breath hoping to be chosen, and he tried to accommodate as many who fit his criteria.  But as I watched him from afar, I always held the thought that he was searching for something, and he knew what he was looking for.

In the years I’ve known him, I’ve never seen him with a woman who could be described as anything other than gorgeous.  Therefore, I was shocked when he announced that he was getting married, (after vowing never to) and he wanted me to meet his intended.  And to my surprise, she was not of the movie star genre he was usually seen with.  But she had a magnetic quality that drew you in for a closer look.

When I spoke with him the next day, I asked curiously how he came about his choice with so many to choose from.  With a tinge of excitement in his voice, he explained that she had the one thing that he had always searched for in a woman, but could never find…an untainted spirit.  He went on to expound on how his quest for a woman with an untainted consciousness had ended abruptly when he met her in the local supermarket.

Later, I thought about the power of his statement, and I began to reflect on my own circle of souls, in search of those who could qualify for such a label.  However, it soon became apparent that I had to first consider the characteristics of an “untainted spirit” and I came to these conclusions…to name a few.

A “tainted spirit” is one who is prone to lie in defense mode, hold grudges, criticize easily, and possess a tongue that can speak both blessings and cursings.  This person can be cynical, unforgiving, a flaw finder, bitter from past experiences, judgmental, manipulative, disloyal, and prone to pessimism.

An “untainted spirit” on the other hand, has an open heart and mind, is confident of what he/she brings to the table, and walks the talk while seeking the good in others.  This person usually has a controlled tongue, clear motives, pure thoughts, a loyal disposition, a kind, and forgiving spirit, a bad memory, real integrity, and no interest in negative discussions.  They trust until given cause not to…and love until it fails.

They view the world from a silk cushion, regardless of what they can afford, and see it as a place of wonder and opportunity, regardless of their experiences.  They hope for the best, give the benefit of the doubt and hold no grudges.  They are also genuine, trustworthy, frank, and unconstrained.

The problem is that in today’s society, it seems more people are consumed with all things pleasurable, suitable attention from their desired source, and the superficial side of life, which includes fine cars, fine clothes, and good financial standing.  Though some of these things are worthy pursuits, we all should be more concerned with what’s in our hearts and might need to consider submitting ourselves to a “washing of our souls.”

Some questions could be mulled over. Is there some debris from the past that is being carried around and needs to go?  Have we forgiven and forgotten?  Since our experiences help shape who we are, this effort could give rise to a new personal standard of excellence and expectancy for good in one’s life.

Bonita Bennett, founder, publisher  Of Being Single Magazine, and a former TV/radio personality, is the author of two books “ How To Catch & Keep The Man Of Your Dreams and The Coming Of Dawn.