Story Of The Week – Providence? 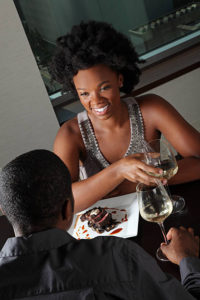 It was a warm Friday evening and Carla was in no hurry to go home when she got off from work.  She decided to stop and eat dinner at a small restaurant on a nearby beach, where she loved the food, and sit at a table near the window.  She wanted to people-watch and there was no better seat in the house.   It was a hot summer night and as she sat watching couples go by holding hands, she wished she was a part of a “love duo” walking on the beach in the balmy air.  She imagined herself strolling along with a special someone, but there hadn’t been anyone in her life for a while.

When Sidney entered the restaurant ten minutes later and sat down, he immediately loosened his tie.  It had been a long day for him and he was in no hurry to head home to an empty apartment. He wasn’t seeing anyone special at that moment, and he felt good about not being obligated to anyone. As the restaurant began to get crowded, Sidney and Carla were the only two people sitting alone at two different tables.  When the waiter spotted this, he asked if they’d mind sharing a table, so that a party of four could be accommodated.   When Sidney spotted Carla and noticed how attractive she was, he moved over to Carla’s table eagerly, as he was glad for the company. However, Carla was embarrassed and hesitant about having him share her table.  Though he was a good-looking guy, she hated to be viewed as alone on a Friday night, but she relented.   But as soon as Sidney sat down, he had her talking and laughing.  Before the night was over, they ended up walking on the beach holding hands.  They began dating and four months later they became engaged.