Fast Lane Love – Can It Work? 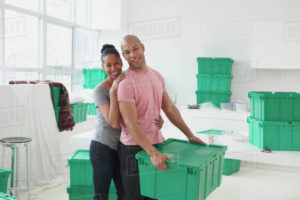 Tracy had been hesitant at first to get involved with a guy who had written separated on his job application, but she found his smile to be irresistible.  During the interview, she caught him looking at her admiringly, and she was so taken by his good looks that she hired him without even checking his references.  After dating for four weeks, she moved in with him when her apartment building converted to condominiums.  She was convinced her prayers had been finally answered, and that they would marry soon.

He claimed his divorce was “just around the corner.”  When items began missing at work in the area where he was assigned, she became suspicious and decided to dig into his background.  She discovered he was an ex-felon who had recently gotten out of jail.  When she confronted him about her suspicions and his background, he became angry. The next day, when she came home from work, her belongings were sitting outside in the rain.

Gerald and Kathy met in the supermarket when their shopping carts collided.  They dated for twenty-four days and decided to elope.  Kathy was quoted as saying, “when you find love, there’s no need to wait.”  Four weeks after they got married, Gerald went to pick her up from work as a surprise and ended up breaking her nose and jaw when he saw her hugging a male co-worker who had just announced his engagement.  Their marriage was annulled a month later.

Cari and Chris met when he sold her a new car.  They dated heavily for four months, and one night Cari had an impetuous moment and proposed to Chris out of the blue.  Chris hesitated but eventually said yes because no one had ever asked her before.  Cari took charge and began planning an elaborate wedding to take place in the summer.   On the day of the wedding, Chris showed up with another woman, and announced to Cari, that he loved someone else, and therefore couldn’t go through with the wedding.

Susan was apprehensive, but she couldn’t help herself.  It had been a while since a guy had brought her flowers and she ignored her gut feeling.  Though her intuition was nudged slightly by a beautiful gold wedding band he wore on his right hand, which he claimed belonged to his deceased father, she chose not to be “paranoid,” about all the good treatment she was receiving.  After three weeks of dating; she let him move into her beautiful home, and gave him the keys.  They set a wedding date for the following month, and he promised a ring.  However, two weeks later, she came home from work early and found a naked woman hiding in an upstairs closet.  It turned out to be the wife he was separated from.