From Rejected To Selected 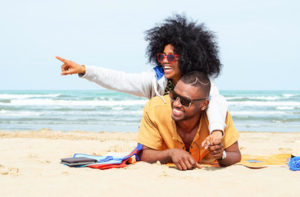 I remember it well.  The night my life changed.  I was out on a blind date with a guy my sister had hooked me up with.  When I stepped out of my car and saw him, I was thrilled and intimidated at the same time.  He was a star and I knew I wasn’t.

He was polite and accommodating throughout dinner, as he talked and I listened, but he looked at his watch so much that I almost became nauseous with nervousness.  It was clear he was not pleased.  When I ordered dessert, he made a long sigh, as if he was ready for the date to end and excused himself to go to the men’s room.

When he came back, I had cancelled the dessert and slipped my coat on.  He smiled for the first time that evening.  He was so relieved that the date was ending that he almost forgot to pay the check. I was glad I was in my own car, so that I wouldn’t have the agony of riding home with him and making polite conversation.

When my sister pressed him the next day on if he liked me, he told her the following… “She’s pretty, but she’s not really what I’m looking for.  He told her frankly that I was a too overweight, and that I had little or no personality.  He surmised this because he had tried to make the evening light by telling jokes, and I had not laughed one time.  Nor had I much to say in general.

When my sister relayed their conversation to me, I experienced more self-pity than anger.  His comments also made me face the truth about myself, and I knew that was my sister’s intent, for I was indeed overweight and in need of revamping.  The last scale reading had calculated at least 100 pounds to be exact. I was also wearing a weave that needed redoing, which I was very much aware of before I left to go on the date.  I had given myself a psych job that convinced me that it would make a decent presentation.

After I hung up talking to my sister, I realized I no longer cared about myself, because one man had stopped caring for me.  And he wasn’t just any man…he was the one I had always wanted.  The one I loved, and the one I desired more than anything.  He was my husband and when he walked out of my life two years ago, my self-esteem and zest for life followed him out the door.  I had been struggling since the break up and my appearance and personality reflected it.

I decided that night that I would go through the trash of my disappointments in search of my self-esteem and rejuvenate the woman I used to be.  I began by erasing the cloud of loneliness and rejection out of my head.  For the first time in months, I prayed for spiritual relief.  I began the next day by making an appointment at the hair salon, and changing my diet.  I took the day off from work and joined a nearby health club.  I also made a major decision to add discipline and consistency to my life.  I know that in order to feel better, about myself, I had to enjoy the view in the mirror.

I began by going to the refrigerator and throwing out all the “joy” foods like ice cream, chocolate cookies, polish sausages, frozen french fries and pizza.  I also decided to wear my own hair.  I had it cut in a short cute style, which was low maintenance and gym-friendly.  I  began an attitude makeover, by composing a list of what I liked about myself, and what I didn’t.  The results were astounding.  One of the things I realized through some serious soul-searching, was that my shyness was due to a fear of rejection.  My husband had abused me verbally by insisting that I was dull and boring, and I believed him.  I’d figured out that I didn’t make friends easily because my self-esteem convinced me that I had little to offer to make others like me.  I decided to become friendlier at work and at church.  I began speaking to people first instead of waiting on them to speak to me.  My confidence grew and soon co-workers were inviting me to join them after work.

I lost thirty pounds in three months and I went to see an image consultant, who educated me on what to wear and how to wear it.  She convinced me to wear clothes that were more flattering to my figure, such as shorter skirts and more fitted jeans.  I also traded my bookish looking eyeglasses in for contact lenses.

I went to the gym four days a week and walked three miles on the treadmill and when summer arrived, I was a size 10.  I had reinvented the old me into a person I suddenly admired and respected.  Not only did I look better, but I felt better.  Suddenly, I had a self-assurance that I’d never had before.  I was getting flirted with on the street, and my confidence level shot from 1 to 10. On the anniversary of my rebirth, I was 80 pounds lighter and I asked my sister to invite the guy, who had started my revitalization, to join her and her husband for dinner with another blind date, which would of course be me.

He balked at first.  Apparently, he had not forgotten the last time my sister had hooked him up, but she convinced him that he would be pleased.  At first, my motive for setting up the date was to see the approval in his eyes, when he saw me, and to witness the shock on his face.  But it backfired when he walked in the door.  I felt beautiful and desired, as I watched him glide toward our table with his eyes fastened on me with a smile on his face.  When he sat down, he kissed my sister on the cheek, shook hands with her husband, and then completely turned his back to them and faced me with a big grin.

“I don’t know who you are beautiful, but I do know that I’m in love already, and that you’re going to be my next wife.”

Everyone laughed…including me.  I remembered that he had a great sense of humor, so I decided not to break the momentum by initiating my plan for confession.  Therefore, I didn’t tell him who I was until he walked me to my door later that night.  (This time I didn’t drive, so I could get him to take me home)  He was shocked and visibly shaken, as he closed his eyes and began to apologize for never calling me again.

I accepted his apology, and when I walked through my door and closed it, I felt like Cinderella must have after the Ball.  As I leaned against the door, I opened the blinds and watched him slowly walk to his car.  He was in a state of shock and I knew it.  Suddenly, I wanted to see him again.

The next morning I called him, and he was excited to hear from me.  I invited him to lunch and he jumped at the idea.

A year ago later he proposed to me in the same restaurant where we had first met, and this time I was able to order dessert and enjoy it.