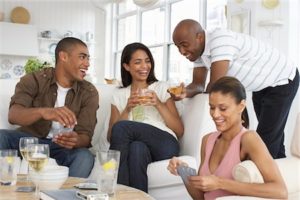 Sherry had labored in the supermarket for hours trying to choose the most exquisite ingredients for a most fabulous meal.  This was the first time she’d ever prepared a meal for a man, and she was excited.  As she stood admiring the table, she pinched herself for being lucky enough to have Tom coming to spend her birthday with her.

She had been shocked when he asked if he could join her for the most special day of the year.  She had been seeing him now for a couple of months, and she was crazy about him.  But she wasn’t sure how he felt about her.  He was attentive but quiet.  They worked together and at the office, he had many admirers, but he seemed to only have eyes for her.

When the doorbell rang, her heart fluttered wildly as she checked the table one more time for perfection.  When she opened the door, he stood there smiling with a big hand-painted sign in one hand, and a small beautifully wrapped box in the other.  The sign read, “Will You Marry Me” in large red letters, and Sherry fainted on the spot.

When she came to, Tom was fanning her with one of her fancy potholders, “I hope this means yes?” he said with a big grin.  “It does,” she replied, as she reached up to hug him.  “It does!”

Nadine was at home and starving. And there was nothing there she wanted to eat.  It was her birthday and she was all alone.  Her family was in another state, and out of pride, she had pretended to her co-workers that she had plans for her special day.  She had moved to  Philadelphia to take a better-paying job.  But she missed her family.  She was miserable as she stared out the window at the street filled with busy traffic.  She was hungry, lonely, and afraid to go out alone to get a pizza.  She wished she could have gone home for her birthday, but her family needed her money more than her presence.

Just as she was about to eat another cracker, someone knocked at the door.  She peeked through the peephole and saw her neighbor from next door.  She shyly opened the door.  She felt embarrassed to be caught home alone on her birthday.  Her neighbor, Sue was ebullient.

“Hi Nadine, are you busy?”  Before she could answer, she hurried on.  “Listen, we need a fourth at cards.  Do you play bid whist?”  “A little…”  Nadine stammered.  “Well girl, come on, we’ve got some good food and my husband has a friend over who just moved here from New York, and we want you to join us.”

Sue lowered her voice, “Girl, be sure to put on some lipstick, because he’s a real cutie, and he’s single!”  “Okay, Nadine replied.”  I’ll be right over.”  When she closed the door her heart leaped with excitement.  She was about to eat and socialize.  Her spirits soared, as she reapplied lipstick and combed her hair.  But she was not prepared for the feast of fried chicken, smoked ham, black-eyed pea fritters, and vegetable pie…or the handsome stranger who stood up when she walked through the door.

“Well,” “he said with a big grin on his face.“My homesickness just healed itself.”  Nadine blushed unabashedly.  The same thing had just happened to her. Her birthday ended up being one of the best ones ever!

Three months later they were engaged.