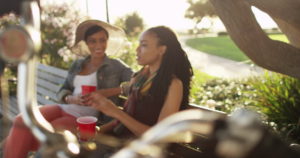 My best friend tried everything to break me and my guy up, and when we finally broke up, she began dating him.

Q.  For the last two years, I was involved with a guy I really loved. During that time, a girlfriend did quite a bit to discourage me in the relationship.  She always accused him of cheating on me.  She also suspected him of trying to date another friend of ours and informed me constantly of her suspicions.  Then we broke up and suddenly she’s dating him and not talking to me.  I am very hurt by the whole thing and I want revenge.  I know all of her secrets and some are pretty horrendous.  The thought of exposing her gives me great satisfaction.  What would you do?

A.  I would do nothing with regard to revenge. I would just faze them out of my mind.  She’ll get hers, because what goes around comes around, and it will be far worse than anything you can come up with.  Meanwhile, know that God is in charge of vengeance.

Q.  My first date after my divorce was a real loo-loo. She was a very attractive schoolteacher, who informed me after a wonderful evening, that she didn’t date men who couldn’t help her financially.  She bluntly told me that sex with her was not free and she wanted me to know this upfront.  After I told her that I was no longer interested in dating her, she left me sitting in the restaurant.  She called the next day to apologize and explained that she had just come out of a bad relationship and that she was very bitter.  Since then she has been calling me constantly, and I don’t know how to get rid of her.

A.  Be a big boy.  Change your number…that is if you can stand the temporary inconvenience.