The Dating Chronicles – The Stalker 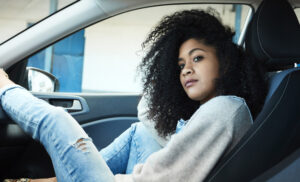 Glynna had been watching the house all night.  She had first seen her boyfriend’s car there two weeks ago on a night when she had followed him and it been parked there every night for the past two weeks. She had parked down the street from his car so as not to be seen when he came out. She hated it when he took time away from her to be with those stupid friends of his, and the thought of him being with another woman was more than she could bear.

She had begun following him weeks ago when she first suspected he was seeing another woman.  She was a physician by day and a detective by night.  She had never caught him with anyone, but she knew it was just a matter of time because he seemed to be pulling away from her at a rapid pace.  As she sat staring at the building, she fought hard to stay awake.

Suddenly, the glare of a flashlight shone brightly in her face. She crouched down in the seat.   Her heart was in her mouth.  Her hands trembled in fear.  She reached over to make sure the door was locked.  She was afraid to look out the window.  Suddenly, there was a tap on the window.  She looked up into the face of her boyfriend, who was staring at her as if she was insane.

She rolled down the window.  “What are you doing in front of my uncle’s house,” he screamed.  “When Bobby called upstairs and said your car was here, I thought he was lying!  Are you crazy! How did you know where my uncle lived:  Have you been following me?” The questions came so fast that her head began to spin.  She couldn’t answer, because she had no explanation.

She had never been so embarrassed.  Without answering him, she sat up in the car and turned the ignition.  He was still yelling.  She pulled off and thought of heading for the river.  She knew they were done and she would never hear from him again. But she drove home instead. She had patients to see in the morning.

Later, she learned from a mutual friend that he and his cousin Bobby had been spending time over their uncle’s house because they were helping renovate his kitchen.