Your Dating DNA – What Would You Do If This Happened To You? 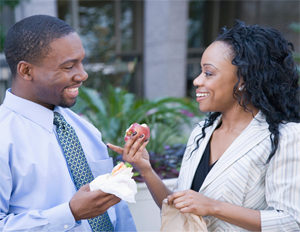 What Would You Do

If This Happened To You?

The Salem/Anderson Report:  Over 300 singles were polled for this quiz.  See if you agree with their responses and think about what you would do under these same circumstances.

If you were very much involved with a man/woman and you saw them out with someone else, what would you do?
71% said they would make their presence known, but would not confront.
22% would confront. 7% would say nothing until another time.

If you saw your best friend’s s/o out with another man or woman, what would you do?… and who would you tell?
84% would say nothing. 16% would tell.

If you secretly admired your best friend’s honey and they came to you one night and confessed their love for you, what would you do?   96% would take a pass. 4% might be tempted.

If you were out at a party with your s/o and a big bully type known to be dangerous smacked you on your bottom when your boyfriend’s back was turned, what would you do?  58% would respond with an angry outburst and then tell their boyfriends.  30% would not tell their boyfriend to avoid conflict.

Imagine this…at a party one night, you meet the most interesting and handsome man/woman. You are impressed.  You like him/her immediately, and two hours pass with the two of you only having eyes for each other while enjoying a wonderful conversation.  You exchange numbers, and then when he/she gets up to go, you notice they don’t leave the party…and you watch as they move to the other side of the room to engage someone else in the conversation.  What would you do, and how would you feel?  91% would continue to enjoy the evening and not be affected.  8% would
toss the number, or be unavailable when he/she called.

If you saw a guy every day who worked in the same building as you and you were attracted to him and wanted to meet him, would you approach him?   54% said yes. 45% would wait for him to make the move.

If you’re out to dinner for the first time with a guy you’re very impressed with, and after you both order an expensive meal and the check comes, he realizes he left his wallet at home, would you pay the bill?
98% would pay the check because they felt they had no choice.

You ask a woman out who has a child, and she agrees to go out but asks if you’ll pay for the babysitter. Would you?
41% of the men said yes.  54% said no.

The best-looking guy in the world stops you from coming out of the supermarket, strikes up a conversation, and then asks for your number. He’s dressed nice, is very polite, and is insistent.  What do you do?  86% would give him the number.  11% would take his number.

For The Guys: A female co-worker you’re not attracted to, has tickets and invites you to a game you’ve been dying to go to.  You know that this is a ploy to be with you, but the game is sold out.  Do you go?  57% of the men said yes.  38% said no because it could be misleading.