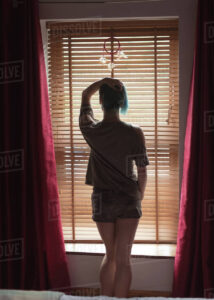 Cindy looked out of the window as Rick entered her building.  Her heart was racing.  She didn’t know what to do.  Nate had called ten minutes before and asked to come over and she acted as if she didn’t already have a date. When the doorbell rang, she stood at the window in a quiet panic.  She couldn’t let Rick in, because she preferred to be with Nate.

Rick was nice.  But Nate was exciting.  She thought about the bouquet of flowers she had seen in Rick’s hand, and how much he tried to be what he thought she wanted.

The doorbell continued to ring.  She bent low to peek through the window to avoid detection.  She could see him pacing back and forth in the vestibule.

Her heart was in her mouth.  She prayed for him to leave, but he kept ringing the bell.  Nate was due there in thirty minutes to pick her up and there was only one way out of her apartment.

She liked Rick.  But she was fascinated with Nate.  Richard was steady and attentive.  Nate was elusive and mysterious.  He challenged her and she spent a lot of time trying to figure him out. As she thought of Nate’s impending visit, she felt lucky, though it was at the last minute, that he would want to spend Saturday night with her.

However, as soon as she finished the thought, she suddenly felt stupid, as another thought quickly filled its place. She realized Rick had never invited her out. He only asked to “come by”

The only real reason Nate called me is that he knows I’ve got a thing for him, and he could call me at any time of day or night, and I’d jump to be with him.

She thought about all the times she waited for him to call and he didn’t.  She recalled the last time he stood her up and didn’t even call for two days.

The doorbell rang again and she knew Rick was worried.  Suddenly, she didn’t want to disappoint him for Nate, who might not call again for another two weeks. She decided that she was done and no longer stupefied by Rick’s aloofness. She buzzed Rick in and pretended to be just waking up from a nap. When Nate showed up 30 minutes later, she ignored the doorbell ringing and told Rick, it was a stranger obviously ringing the wrong doorbell.