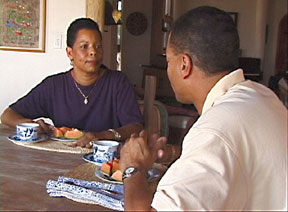 Roger had always been popular.  He was smart, handsome, and full of mischief.  His phone rang constantly in the office from female co-workers who would go to great lengths to get his attention.  However, he would flirt playfully but never stop for long at any one desk.

For him, his life had room for only Kathy…and they’d been together since college.  But there was one woman in the office whose presence he was well aware of.   Margo.  She worked in the office next to his and her behavior was a constant enigma to him.

She never smiled and whenever he joked in her presence, everyone laughed, but her.  In meetings, he would stare at her, but she never looked his way.  When he spoke to her in the office, she would mumble a faint greeting without looking him in the eye.  She was always polite when duty called for them to talk, but she never responded to the witty somersaults he displayed to make her smile.

Then one day, he saw her at a basketball game with a guy and he felt hot and flustered for the rest of the evening.  After seeing her at the game, he suddenly became distracted at work and pre-occupied with Margo.

A week later, he felt compelled to knock on her door.  It was time to investigate what he was feeling. “May I come in?” he asked in a very serious tone.  She looked up as if startled.  Her face has its usual blank expression.  He closed the door behind him.

“Are you busy tonight?” he asked in a voice that stammered with uncertainty.  “If not, I’d like to invite you out for a drink.  We need to talk.”

For the first time, Margo looked him directly in the eye and smiled slowly.  “Sure” she replied.  “I’d love to.”  She felt victorious, as he turned to leave.  She had set out to get his attention by ignoring him and she had succeeded.  They began dating, and two years later, he married Margo instead of Kathy.

Nia DaCosta (November 8, 1989) is a screenwriter and director. She is known for her breakout film Little Woods (2019) and for co-writing Candyman (2020). In August 2020, it was announced that she would be the first black woman to direct a Marvel Film when she directs the upcoming sequel to Captain Marvel (2019), scheduled to be released in 2022.
The Dating Chronicles

“Ironically, my fiancée, who has always operated outside the box, proposed to me on the same night I planned to propose to her. We ended up exchanging rings. The difference was that I gave her a diamond ring and she gave me a wooden African band.”