The Dating Chronicles – The Puzzle 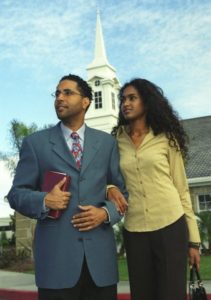 As Dee walked up the stairs of the church, she felt foolish.  But she had to see for herself.  She had heard that her ex-boyfriend John was getting married to the same woman who had been her nemesis for years. And she felt that the only way her heart would be mended was to witness the act, so she could once and for all be released from the bondage that had kept him on her heart for too long.

As she sat in the back of the crowded church, she pulled out some tissue in anticipation of the tears she expected to shed.  However, when his attorney friend Steve took the seat next to her, she suddenly lost interest in the wedding, as he began flirting with her in whispered tones.

By the time the wedding was over, they had made plans to meet later for drinks and her mood was now one of excitement.  She had always admired the handsome Steve from afar and was glad that he finally noticed her.

That night drinks turned into dinner, and dinner evolved into a series of late-night rendezvouses, yacht rides, and other high-end activities that swept Dee off her feet.  Dee was 35 years old and had never been out of the state.  Nor had she experienced half the things Steve introduced her to over the next several weeks.  Therefore, she was overwhelmed with joy when after two months of dating he invited her to fly with him to Paris for his birthday.

On the day of departure, Dee was excited as she sat in her lobby waiting on Steve to pick her up for the ride to the airport.  However, he never showed, and he never called to say why.  She later learned that he had flown to Paris with his ex-wife.  She never heard from him again, and it was a puzzle that bothered her for months.