The Secrets Of Women Who Win At Love 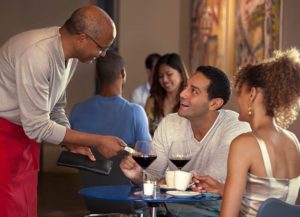 Who Win At Love

Gloria was out on a first date with a guy whom she felt had great potential.  He was good-looking, charming, and established in his own business.  But when he kept complimenting the waitress, who happened to be very pretty, every time she came to the table, Gloria excused herself and left the restaurant.  When he called later in an uproar about her disappearance, she calmly explained that she left because she found his behavior rude, inappropriate, and unacceptable.  He sent her five dozen roses the next day with five apologies.  “That one incident,” says Gloria, “set the tone for our relationship, and he became an ideal boyfriend and he is now an ideal husband.”

Lisa – “For the first two months of the relationship, I establish the groundwork for respect, by not dialing his number unless it’s imperative. The competition is so great out here and men get bored so easily that a woman has to distinguish herself as a “royal find’ or loses her ground quickly. She must establish early in the relationship that she is the one who must be treated like a princess.”

Sandy – “I accept no excuses for bad behavior.  If he disappoints me once, he’ll never get another chance, and I say that up front, and I’ve never dated a man who didn’t go all out to please me.”

Shelley – “I learned to keep your deep feelings to yourself until the wedding day.  I don’t care what he says.  Mystique will captivate a guy’s attention for centuries.”

Kathy – “Mix a cool demeanor with a touch of sweetness and he’ll never leave your side.  My motto is…Never let your need for him show.”

Joan – “Always manage to fit him into a busy life.  Never let him see you sweat to be with him.”

Stephanie – “If you want love, don’t settle for sex.”

Yvonne – “Speak your true mind and he’ll honor you for it.”

Marcie – “Don’t complain, when you’re not being treated the way you want.  Find the courage to move on and wait for what you want as long as it takes.”