Relationships: When Your Lover Wants Out And You Don’t. 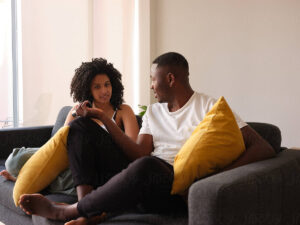 by Camille JadenThe two people in front of me refused to look at one another. The woman was antsy and couldn’t sit still as tears glistened in her eyes.  In her hand, she held a photo of the two of them laughing as they hugged one another. He spoke first.  “I just don’t want to be with her no more,” he said as he stared at the wall.  “To be honest, I no longer love her.  And I haven’t for a long time.  We just don’t share a common ground.  I don’t like what she likes and she insists that I be this person she wants me to be.”

The look on his face was one of relief.  He’d confessed and now he was free.  No longer did he feel bound to the marriage vows that joined them.  His denial of love would surely now, he thought, silence her insistent plea to be as they once were.  He turned to her.  She was crying softly now with released tears that slowly cascaded down her cheeks.

He continued, without looking at her.  “I don’t want to hurt you.  I just can’t do it anymore.  You’re a wonderful person, and I’m sure you’ll meet someone else who can make you happier than I did.”

She reached out and touched his arm.  It seemed he recoiled.  But she pressed on and ignored the reaction. “I love you and I only want to be with you.”  He sighed deeply.  He was exasperated. “Can you hear?” he asked, with pronounced irritation.  “It doesn’t matter how you feel.  I don’t love you anymore, and you need to understand that and get on with your life.”  She broke down again crying.  He walked out.

Counseling had been his idea.  He felt he needed an “interpreter,” because his words weren’t making an impact.  He had asked for a divorce, and she refused.  When he left the room, her crying stopped abruptly, as her face twisted in conjunction with the bitter words that spewed from her mouth.  “I hate him, and I’ll never let anyone else have him.  He’s my husband and I don’t ever want to be single again!”  I ended the session because I knew there was no point on that day, in trying to affect her thinking.  Her mind was set on hurting him now, and the only way she could was not to give him what he wanted.

Why does love die?  Maybe, it’s because we’re too quick to blend our souls with someone we don’t really know.  And when the smoke of fantasy clears, we usually discover that we are hooked either emotionally or socially to someone who is not who we thought they were.  I contend that you cannot fall in love, you have to grow in love, and when it happens, it’s an inseparable bond that connects two people.

There are a variety of reasons why people who once held hands, can no longer stand to touch.  But seldom is it due to one of the parties falling out of love.  Because real love is forever, regardless of trials or tribulations.  Common values and interests should influence greatly the reality of compatibility.  Everything else wanes in the wind.  Too many people end up together bound and tied in relationships that should have never gone past dating.  And the reasons are usually attributed to such frivolous things as “good sex”… “It seemed a good idea at the time”…. or…” we had been together a long time.”

A friend married a woman who he knew he didn’t love.  When they walked down the aisle, he looked like he was on his way to prison.  The marriage lasted two months.  Later, he confessed that he married her because he felt he owed her, after being with her for five years. When they broke up, he felt he had at least given her something for her time…his name.

One should never ever hang on for dear life when the feelings are no longer mutual…once love has died, it should be buried.