You Know You’re With The Wrong Person When… 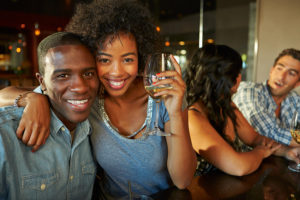 Ken:  “On a first date, I took a very attractive woman to a pool party at a friend’s home.   At the end of the evening, she criticized the host, her attire and her taste in decor all the way home in the foulest language imaginable.  Of course, that was the last time I saw her.”

Shayla: “I went out with a guy who pulled up in a gas station after we left the restaurant, and asked me for $20.00 for gas.  At first, I thought he was kidding, but when I laughed, he erased the smile off his face and stated he was serious.  When I balked at his request, he said he felt it was only fair that I contribute financially to the evening.  I was offended, and asked to be taken home.  I never went out him again.  However, two of my male friends said they saw nothing wrong with his request…it was just the way he did it.  Go figure!”

Mariel: “I was engaged to a guy who showed me too many times during our dating period that he was not stable.  But I just wanted to marry, and I was ready to walk the aisle with whoever asked to get out of my parents’ home. When I hosted an engagement party and my “fiancé” didn’t show up, my brain finally kicked in and I realized I was making a huge mistake.”

Kay: “My boyfriend of six months was a single parent who was raising his two children alone.  To help him, I left my job daily to pick his kids up from school and bring them to feed them.  When my birthday rolled around, he took his kids out for pizza and didn’t even invite me.  When I mentioned later that he missed my birthday, he said he wasn’t into birthdays.”

Lynn: “When I met a good-looking guy at a party, I knew instinctively he was not for me, but I was dazzled by the fact that he drove a Porsche and claimed to be a doctor.  I was fascinated by his presentation and I let my guard down.  One night, we were leaving a restaurant and walking to his car, when a man walked up from out of nowhere, shot him and ran.  He didn’t die, but later I learned from the police that he was a reputed drug dealer.”