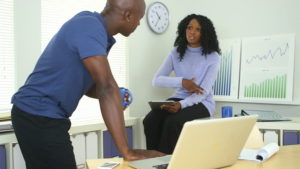 1.  The Whole Romantic Thing:  When a guy doesn’t display romance, it isn’t because he doesn’t know how.  Many guys aren’t romantic because they choose not to be.  Every man has the ability to be romantic if he is motivated from within.  When a man is really in love with a woman, he wants to see her smile and he will do everything in his power to keep a smile on her face.

2.  The Emotional Issue:  Despite the myth, men are emotional.  A large majority of us are just out of tune with our emotions.  Most guys, from the earliest days of boyhood are taught never to express or show emotions openly.  It’s considered taboo to display any emotions that resemble a softer more caring side to their masculinity.  Instead of dealing with their emotions, men are prone to figure out crafty ways of suppressing them.

3.  Why We Lie:  To many single guys, lying is considered a useful tool in the world of dating, when faced with certain circumstances.  Most see the truth as unbearable for most women to take.  Men see controlling a situation as the ultimate display of manhood.  Instead of dealing with the realities of a woman’s feelings and emotions, some guys lie to maintain order.  Many times in order to avoid reality and face embarrassment, a man will lie to protect his most precious asset…his ego.

4.  What We Want:  When a guy treats a woman well, it doesn’t necessarily mean he loves her.  A man will do whatever it takes to support his agenda…whatever that might be.  No time period is too long, no task is too difficult, it’s all about his plan and/or his motives, which is not always clear…even to him

5.  What We Run From:  Few men appreciate unnecessary responsibility or worries.  Men understand that life’s mandatory responsibilities are difficult enough.  Therefore, they don’t usually wish to volunteer for extra, unless they fall in love.  In relationships, a guy wants his way with as much minimum effort as possible.  Even a good guy doesn’t want to be liable for what he doesn’t have to be.

6.  Why We Cheat:  It is not uncommon for a guy to view multiple relationships as being constructive.  Some guys view cheating as warming up before the big game, getting everything out of their system before it’s time to get serious with the woman they have genuine feelings for.  Others just have short attention spans in relationships or bore easily.  That is, unless they’re swept off their feet by being fascinated beyond their control.

7.  The Love Chase:  A woman should never try to convince a guy to love her.  Men see things along a straight line.  Either we like you or we don’t…we can use you or we can’t.  Men don’t believe in resurrecting life into something that appears dead.  Depending on the circumstances, a woman can convince a guy to choose her by appeasing his ego or becoming submissive, but that does not change his feelings.  When a woman tries to convince a man to love her, she can appear desperate, and desperate women are always at serious risk of losing their appeal..

8.  Men Are Intuitive:  A guy knows when he’s a woman’s second choice.  Just as a man can recognize a woman who is in love with him, he knows when a woman is not entirely under his spell.  Men function off recognition and ego and both need attention.  Therefore, when a guy is not getting all of a woman’s attention, his ego instinctively assumes the presence of another man.

10. Our Memory Bank:  Some guys sometimes employ a convenient lack of memory. A convenient memory is very effective for evading the truth and breaking promises.  A woman should never engage seriously in a relationship until she sets the tone, and the man proves himself responsible and trustworthy.  By setting a tone, a woman lets a guy know what’s allowed and what isn’t, which leaves little room for a convenient memory or less than satisfactory behavior.