The 3 Desperate Lies Women Tell Themselves 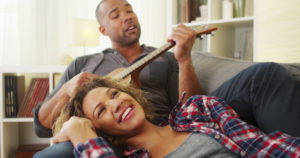 In The Dating Game

by Hayley DiMarco and Michael DiMarco

We all lie at some point in the dating relationship.  It’s just a matter of whom we lie to.  For some reason women have gotten really good at lying, not to the man, but to themselves.  Women somehow find it easier just to ignore the truth-i.e., lie to themselves-than to face up to the fact that yet another man just isn’t the one.  That’s why so many women stay in bad and even dangerous relationships when to the outside observer they so obviously need to get out.  What these women do is concoct in their minds some big lie like, “Things are getting better,” It’s really my fault he gets mad.” Or “I can’t bear to be alone, so I have to put up with him.”  We’ve all seen it before and it’s nasty.

The woman who lies to herself looks as desperate as she is.  But the lies women tell are not always that obvious to the woman herself.  Sometimes the lies don’t keep women in relationships…they keep them out of relationships.

Oh, what woman hasn’t uttered these words?  It’s in the DNA makeup bag or something.  This lie says that all he needs is you to be a better man.  “He has never changed because he has never had someone to change for.  But he will want to change because of how much I love him.  I will be able to make him better.  He will become Prince Charming, and I will be his princess.”  Ah yes, the battle cry of the delusional.

Let’s just say this now:  you can’t change him.  It doesn’t matter how much you want to or try to.  He will not change for you.  Oh, sure, he may show progress.  He may even look like he has changed.  But if he changed for you, as soon as you break up he will go back to doing the same things because he’ll have no more need to please you.

The thing is, just like women lie to themselves, men will lie to get what they want.  And this includes lying in what he does just to please you temporarily.  The truth of the matter is that real change comes when he wants to change, not because you want him to.

From the man’s perspective, don’t think he doesn’t know you want him to change.  He’s not as dull as you may think.  When he senses you want him to change, his ego takes a nosedive.  And he starts to feel like less and less of a man when he’s with you.  After all, if he were the man he was meant to be, you wouldn’t have to work so hard to change him, he reasons.  The feeling is both ego-deflating and claustrophobic at the same time.  The last thing a man wants is a woman who wants to change him.  So if you see several things about him you want to work on changing, then work on dating another guy, because this one’s probably not the one for you.  Love means accepting the loved one for who they are, not who you imagine they can become

When a man cheats on a woman, something amazing often happens.  More times than not she gets madder at the female who “lured him away” than she does at her man.  She’s ready to rip that woman’s head off.  She can’t wait to tell her friends all about the slut who went after her man.  “After all,” she reasons, “he wouldn’t have done anything if that woman didn’t make the first move.”  The lie is that it didn’t take two to tango, it only took her, that seductress.  But surely in a moment of sanity, one can realize that the man is more to blame than the interloping woman.  After all, he is the one who supposedly was in love with one woman while seeing another.  He is the weak link in the relationship, not the sleazy man-stealing female.

This happens all the time.  The other woman gets blamed, chased down, and talked about.  And for some unknown reason, the girlfriend puts the man into a forced relationship “break.”  He gets the cold shoulder… she won’t return his phone calls or have anything to do with him for a time.  But once he has proven himself and she’s convinced that he has “learned his lesson,” she softens up on him.  She reasons, “Now he realizes how important I am to him and that he can’t live without me.  So I’ll give him a second chance.”  And another lie takes root in the female psyche.  The “slut,” of course, will never be forgiven for what she has done, but the man, well, she’s sure he is sorry.

The truth of the matter is that she didn’t teach the guy how valuable she is to him.  She taught him that he can cheat and get away with it.  She showed him that he can cheat, blame the other girl, be in the doghouse awhile, and in the end, everything will be forgotten once she’s convinced he has learned his lesson.  It’s a great scam for men, really.  They just have to let the woman talk herself into believing her own lie.  The man gets off the hook, and the other woman becomes public enemy number one.  And the girlfriend has been played like a cheap guitar.

A desperate woman will excuse all kinds of behavior:  “He didn’t mean to hit me.  He was upset, and I shouldn’t be nagging him when he is upset.”  “The reason he drinks so much is that he lost his job and that is the only way he can deal with it.”  A desperate woman will excuse any behavior from a man as long as he has a reason.  This is a major self-deception.  Every action has a reason.  Good or bad.  Big or small.  And a man can come up with a good-sounding reason for everything he does.  The desperate woman just needs an excuse to believe in so she can justify his actions and keep the drama alive.  Being upset is never an excuse for lashing out at someone.  A healthy woman knows this and won’t allow a man to use any excuse to be hurtful or violent.  And repeatedly telling him “I just won’t stand for this,” but then accepting his “I’m so sorry” is just as much of a lie as not saying anything to him in the first place.  A healthy man might need correction occasionally, but it won’t happen time and again.  If bad behavior has become the norm, then consider the lies you are telling yourself about his behavior.

Excerpted From The Book, The Art Of The Chase.