The Dating Chronicles – The Conversation 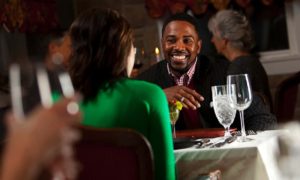 Brent had guessed long ago that his boss Carla liked him, but he had chosen not to acknowledge it.  She didn’t appeal to him in any way, and he worked hard to discourage what he viewed as subtle flirtations.  However, he would have never imagined that she’d have the guts to ask him out to dinner, though they had been working together for over four years.

As they sat in the near-empty restaurant, he poured the wine carefully as he studied her face.  Her affection for him was hard to conceal and he knew that this invitation to discuss a new project over dinner was a ploy to be alone with him in a romantic setting.  He accepted the invitation out of courtesy, but he was intrigued by her boldness.  Though she was his boss, she had always treated him with favor, and he was teased constantly about it at work.

He watched her, as she went through the mental exercise of composing her speech.  He was curious as to what approach she would use.  He expected that before the evening ended, he would have to give the proverbial speech that he had given on more than one occasion to other admirers at the office, on how he was totally against mixing romance with business.

He raised his glass to set the tone.  She smiled, as he spoke of his fondness for her as a boss.  It was then that she handed him a copy of her letter of resignation, and told him that he had been promoted to take her place.  In shock, he broke out into uncontrollable laughter, as he wavered silently between elation and disappointment.  In addition, she informed him that she hoped that since they would no longer be working together that they could perhaps see each other on a personal level…to which he quickly consented to with a big grin and without the slightest hesitation.