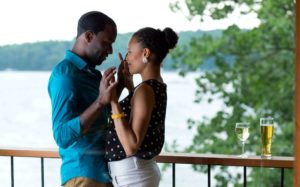 Last year, was a tough year for me on the dating scene. I got burned a lot because I wasn’t paying attention to what I was doing.  Therefore, I made the decision to begin this year with a clean slate and a more alert mind.  I decided to leave behind the “blisters” that still pushed my anger button when I think of all that I experienced at my own hand.  I resolved to make smarter moves from now on.  Here is what I learned:

Don’t Go By Your Feelings:  Never assume a guy’s heart is really yours unless he gives you a ring…and then proceed cautiously. A friend’s boyfriend gave her a ring and took it back two weeks later.  My evaluative skills weren’t at their best when it came to assessing the feelings of the opposite sex.  I came to realize that I spent too much time rationalizing and misinterpreting behavior that would have not been acceptable if I’d been in my right mind, and not so starved for affection.

Reverse The Chase:  If you see a guy who looks interesting to you, find a way to get his attention.  This calls for a sliver of imagination and a load of confidence, but it won’t work if your self-esteem is in bad shape.  I met tons of guys last year by putting myself in a position to be met.  I met one guy who was walking his dog, by simply asking “what kind of a dog is that?”  I didn’t find love, but I had fun and made some new friends.

Seek Compatibility: From now on, the interview process will be extensive on my part.  I will never again date a guy if we don’t enjoy the same things.  Two months ago, I suffered through a boring dogfight out in the wilderness because the man was fine and driving a Porsche.

Be Less Starry-eyed: I found that it’s not smart to mistake good manners and chivalry for meaningful emotional behavior.  Just because a guy opens the door, pulls out your chair, and offers you his umbrella, doesn’t mean he thinks you’re special.  Sometimes, it’s the one with the worse manners, who’ll come over in the middle of the night if you’re sick.

You Can Only Change Yourself:  I will never again try to reform the guy, who glares at other women when he’s with me…won’t hold my hand in public, and drinks a little too much every chance he gets.

Pay Attention: Bad manners can give a certain insight into your date before you get too attached.  At a party, if you meet a guy, you can easily tell by his actions how he’ll treat you if you date him.  If he asks you to dance, and doesn’t escort you back to where he found you when the music ends, he will most likely continue this pattern by ordering first in a restaurant, get off the elevator ahead of you and compliment a female stranger on her attire.  I was out on a blind/double date with my best friend and her new boyfriend.  My date spent the evening complimenting his friend on “how fine his woman was.”  I hate to admit it, but I ended up staying the whole evening hoping for the best when I should have left him sitting in the restaurant.

Don’t Judge A Book By Its Cover: Forget about how cute he is.  Wrongdoing guys don’t sneak up on you.  The signs are always there in the beginning if your radar is working and you’re not blinded by the glamour.

Use Caution With The Truth:  When a girl meets a guy, she should never say, she’s not dating anyone if she isn’t.  She should always say when asked the question.  “I have friends,” which is ambiguous, but usually true.  I found out in the worst way that some guys find you more exciting if there’s a possibility that he’s competing for your attention.  Over dinner one night, I told a first date/prospective “husband” (I had already imagined myself in a white gown walking down the aisle with him) that I hadn’t dated anyone in a while.  Later, he told a mutual friend that I appeared lonely.  He never called again and I was devastated by the comment.  I duck every time I see him in public.