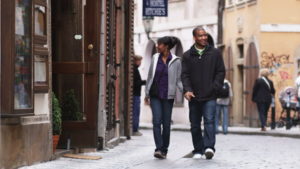 Not long ago in Chicago, a woman was found raped and murdered in her apartment in a high-rise building in a middle-class neighborhood, and there was no sign of forced entry.  The police were baffled because there was no boyfriend of record, and no neighbor had seen anyone enter or leave her apartment.

Later, police became suspicious of a cable repairman, when one of her friends remembered she was talking to her on the phone when the cable guy arrived.  She told the police that the woman was concerned because the cable guy seemed weird, but decided she was being paranoid. Eight weeks later, the cable guy was arrested for her murder

Unfortunately, people who live alone are at high risk to become crime victims.  Therefore, caution must be taken whenever a stranger is scheduled to come to your home for repair work or whatever.  Here are 12 safety tips.

1.  Use your imagination. If you live alone, try to have someone at home with you when any stranger comes to your door to do work of any kind. If not possible, leave a door closed with a television set on to give the impression that someone is in the house besides you.  Be sure to pretend to “talk” to someone else in the house before you open your door, and speak loud enough to be heard.

2. Think defensively. Keep a container of pepper spray on hand at all times in your home and in your car, and if you feel suspicious in any way, walk around with it while the stranger is in your home to use if you need to.

3. Pay close attention. Don’t be careless. Criminals look for open opportunities and unsuspecting targets.  Don’t sit at a stoplight and text.  Keep your eyes open and be alert until the light changes.

4. Watch your step. If you have to go out alone at night,  be aware of your surroundings. An observant person is a tough target.  Don’t be nonchalant or distracted when you’re in the street.

5. Don’t advertise your vulnerability.  Those who are looking for a victim, whether to rape, mug, or car jack, will choose a person who has what they are looking for.  A person who flaunts what a criminal wants may be attracting some unwanted attention.  Don’t wear expensive, flashy jewelry when you go out shopping, day or night.

6. Stay alert! Never leave your car doors open after loading packages into your car.  Always, re-lock the doors again, before you go to the driver’s side of the car.  It only takes a moment for a criminal to slip inside your car.  Don’t talk on your phone in the street.  Phones are snatched daily on urban streets from unsuspecting talkers.

7. Avoid isolated areas. Stay with the crowd and on the beaten path.  There really is safety in numbers.  Stay where the people are, even if you have to walk a little farther.  Solitary paths and walkways offer prime opportunities for criminals.

8. Use wisdom.  Avoid or minimize your use of outside automatic teller machines.  Increasingly, this is becoming the easy mark of choice for criminals.  If possible, do your banking inside the bank.  A male friend was robbed at an outside ATM machine while talking on his cell phone. He was withdrawing $200.00 and the robber made him withdraw $300 more.  He was so shaken up, he hasn’t used his cell phone in public since.

9. Avoid any confrontation.  Avoid arguments and controversy.  If challenged or mistreated in public, walk away if you can’t talk it out.  A few choice words are never worth a life.  If you agree to sell a personal item to a stranger, be sure to set up the meet at a local police station.  There have many reports of tragic endings to street transactions. A teenage boy was recently killed when he and his dad agreed to sell one of his video games to a “buyer.”  However, when they showed up for the meet, they were robbed and the young man was shot to death.

10. Be careful who you take home.  Be smitten, but pay attention.  Careful and thoughtful observation in the initial stage of dating can help avoid getting involved with someone who has violent tendencies.  If he/she displays an unstable or unusual temperament … back away immediately.  Though she felt uneasy, a cousin allowed an impressive first date to come in after he asked to use the bathroom when he brought her home.  He came out with a drawn gun and raped her.