Rage: The Other Side Of Love 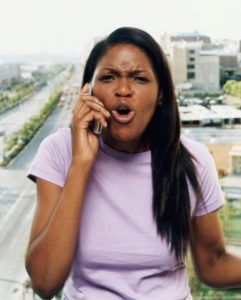 As I walked toward the prison gates, my legs felt numb.  I couldn’t believe I had driven over seventy-five miles to visit one of my best friends, who had been sentenced to five years in prison for attempted murder.  I also couldn’t believe the sight of her when she entered the visitor’s room.  All of the evidence of her former diva existence was gone.  Her hair was so un-kempt I almost didn’t recognize her, and all of her treasured long fingernails were broken.

She smiled when she saw me and I burst into tears.  I was still in shock over all that happened, and seeing her in that condition didn’t help.  As she spoke sadly about her life behind bars, it was difficult to fathom that she could go from being a six-figure corporate executive to being a prison inmate…but then again it wasn’t.

We had been friends since high school and she has always been possessed by a violent jealous nature.  In the twenty years, I’ve known her, I’ve witnessed a number of verbal and physical attacks initiated by her on unsuspecting boyfriends prompted by her jealousy.  Several years ago, one boyfriend was sprayed with Mace in the face when she “caught” him with another woman, who turned out to be his sister from out of state.  Another incident occurred when we were all out at a party one night with some friends and she walked upon her boyfriend with another woman.  She asked him who the woman was, and when he answered that the woman was a dear friend, she attacked the woman, knocked her to the floor, and slapped her boyfriend in the face hard.

Therefore, when I received a call at 2:00 in the morning not too long ago, that she had been arrested for stabbing a woman she had caught in bed with her fiancé, I was shocked, but not really surprised.   I had always suspected that with her jealous nature, she would one day do something really tragic and she had.

Later, as I was driving home from the prison, I reflected on the rage of jealousy and the debilitating effect it can have on those who possess it.  One of my aunts (who’s deceased now) was so jealous of her husband that she followed him everywhere he went, including work.  He ended up beating her so badly, she lost her eyesight.

Studies show that assaults, homicides, and murder/suicides among lovers are happening across the country at an alarming rate, and jealousy is considered one of the major causes behind these tragedies.

During research for this article, I learned of many cases where jealousy has ruined the lives and careers of a number of men and women all over the world.  Recently, in Chicago, there were three stories in one day where ex-boyfriends murdered their ex-girlfriends.  In one case, the man killed himself as well.  Upon investigation, as is common in many cases like this, the police learned that the ex-boyfriends had acted out of a jealous rage that had been visited on the victims before.

The problem is that too many people don’t know how to avoid the madness of this horrible trait until it’s too late.

Four years ago, a friend was killed by an ex-boyfriend, known for his jealousy, when she was dropped off at home by a male co-worker, who was only giving her a lift.  The ex-boyfriend not only killed her but killed the co-worker as well.

My position is at the first sign of a jealous nature with a romantic interest, I turn into a ghost.