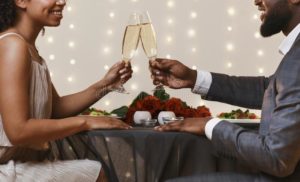 Karmela-28: “I was on a blind date with a guy who seemed to be struggling to converse after we initially met and sat at the bar.  The place was crowded and loud and I thought he couldn’t hear me well.  He would stare at me, and then look abruptly look away as if he was distracted.  When I attempted to initiate conversation, he would mumble a response with his head turned in another direction.  Finally, when I asked if anything was wrong, he explained slowly that I was a little too heavy for his taste and that I looked much smaller in my photo.  He gave me a weak smile and apologized for being so blunt.  I excused myself without responding and left.”

Ryan-30:  “I was having dinner with a new date in a very upscale restaurant when a bitter ex-girlfriend walked up and began telling my date about my “preference” for exotic sexual positions and then warned that she’d better beef up whatever exercise program she was on, in order to keep up.  I was so embarrassed and angry, that I stood and grabbed her around the neck before I knew it.  The manager called the police, and we were all thrown out of the restaurant.  Ironically, my date recognized the incident as the typical ranting of a bitter jealous woman, and we moved on to another restaurant to resume the evening.”

Marva-32:  “I had been on a whirlwind dating a wonderful guy for only three weeks when he asked me to accompany him to the zoo on a lovely Sunday afternoon.  When we stopped in front of a pond where two beautiful Flamingo birds were sipping water, he pulled out a ring and asked me to marry him.  I said yes without giving it a thought, and dropped everything in my busy life to be with him.  We eloped to Puerto Rico the next week, and we’re still happy and in love two years later.”

Pam-34:  “I was excited about being out on a first date with a guy who was smart, handsome, well-dressed, and driving a brand new Benz.  When he asked what restaurant I wanted to go to for dinner, he frowned at my reply, as if he didn’t approve.  When I suggested another less expensive place, he said the first choice was fine.  When we got to the restaurant, I ordered lobster tails and he ordered crab legs.  However, when it came time to order dessert, he excused himself to go to the men’s room.  When he didn’t return after fifteen minutes, I asked a waiter to check on him and discovered he had left the restaurant.  I was so embarrassed, I couldn’t breathe.  I paid the check and left the restaurant in tears.  The next day when I called the friend who introduced us to complain about what happened, he informed me that the guy had a reputation for testing women for what he called “the gold-digging gene” and I failed the test.  He claimed the guy left me with the check to teach me a lesson.  I am still angry about the incident and it happened over three months ago.”

Laurie-29: “I got stood up one night at a popular restaurant where I was supposed to meet a guy I’d been dating awhile.  I sat there waiting for him a hour longer than I would have normally, because it was raining very hard outside.  While I was sitting at the bar, I noticed a very striking guy not far from me, who also appeared to be waiting for someone, and it seemed he had been there when I arrived.  Just as I decided to leave, he sent me a drink.  I nodded my thanks and invited him to join me.  It turned out that he had been stood up as well, and we ended up spending the evening together and having a great time. Six months later, we were married, and we’re convinced that Fate had a hand in our meeting.”