The Anatomy Of A Fantasy Date 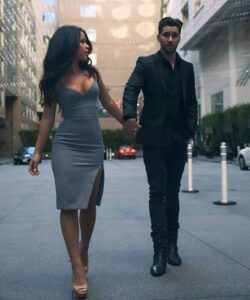 Of A Fantasy Date

I was excited and pinching myself as I dressed for the evening.  I had been invited to a dinner party by a very handsome distinguished man I’d met at a medical conference.  He was different from anyone I’d ever met in that he was a doctor with a mission in life.  After I met him, I called every girlfriend within a twenty-five-mile radius to brag about being chosen out of a crowd, by someone who engaged every female eye in the room when he walked in.  And of course, everyone was waiting with bated breath to hear about my date.

He was an hour late, but he showed up with a single red rose and a big grin and successfully charmed away my irritation.  When we got to the party, I felt so proud to be with him because it was filled with prominent people and they all seem to know him.  However, I also made note of the fact that whenever he stopped to speak to someone, he would let go of my arm, turn his back, and fail to introduce me.

This was our first date, and I had spent a pretty penny on a beautiful dress, which he didn’t seem to notice.  I expected his eyes at some point during the evening to at least reflect an approving glance, but there was none. When we sat down to dinner, he introduced himself to the others at the table and didn’t introduce me.  In an awkward attempt to be jovial, I chided him about why he hadn’t introduced me, and he stared at me as if I had asked a stupid question.

“You’re a big girl!” he said with a frown. “Feel free to tell them who you are!”

At that point, I was ready to go home and was convinced I had gone out with the wrong guy.  I considered him rude, and socially ignorant, but I wasn’t quite ready to leave.  I decided to give him another chance, but I turned on my “attitude” button.

Over dinner, he was suddenly very attentive, significantly conversant, and even more interesting than he was at our first meeting.  I became mesmerized by the way he looked into my eyes when he talked to me.

When the music began pulsating throughout the room, he pulled me to the dance floor and finally remarked about how “beautiful” I looked.  Then, just as I made the decision to put him back on my “redeemed list,” a very pretty woman with a stern look on her face approached us on the dance floor and without acknowledging me, asked him if she could speak to him for a moment.  He quickly excused himself, patted me on the arm, and promised to be right back as he left me standing in the middle of the floor.

I went back to the table, though I was fuming, and waited with steam coming out of my ears.  I was outdone by the fact that he didn’t take the time to explain who she was or walk me back to the table.  After twenty minutes, I decided to leave and as I headed toward the door, I spotted him and the woman arguing in a corner. When I approached him to inform him I was leaving, he waved me away.

The next day I sent him a note that read,  “Please forward my phone number to someone with real class.”    I put off calling my girlfriends for a week, and he never called again.