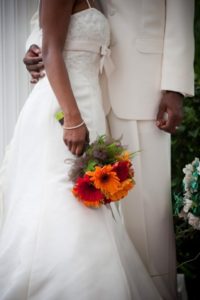 Q:  Next month, I’m having a private wedding at my home and I only wish to have my closest friends and family.  But I have a problem.  I cannot stand my best friend’s boyfriend, because he has hit on me several times behind her back, and she can’t go anywhere without him.  He is obnoxious, vulgar, and flirtatious, and I don’t want him within ten feet of my door.  I know if I tell her not to bring him, then she won’t come.  And I can’t imagine getting married without her being there.  What should I do?

A:  Make a choice.  Either put up with him for one day or get married without her.  You need to determine which feeling is the most important…the one about her, or the one about him.

Q:   For the last three months, I have been “dating” a guy over the phone I’ve never seen.  He lives in another state and we had come to the point where we felt we had fallen in love.  We talked every day, and he even spoke of marriage.  Then last week, for the first time, he sent me a photo of him, (we had agreed not to exchange pictures because we wanted to wait until we met) and I’m so turned off by his looks, that I can’t even talk to him anymore.  I have been dodging his calls, because I don’t know what to say. What do I do?

A:  So,  you talk to a guy for three months, and you fall “in love” with his voice, but you can’t take his photo.  I say, get back on the phone and insist on meeting him.  Many people aren’t photogenic.  Maybe he looks better in person.  If you meet him and are still turned off, you have to tell him in kind and gentle language.  Then again, maybe he was trying to prepare you by breaking the agreement.  Hang in there and wait until you see him.  If you must reject him, it’s better to do it in person.  Just keep in mind how you’d want to be treated if the shoe was on the other foot.