Story Of The Week – A Magic Moment 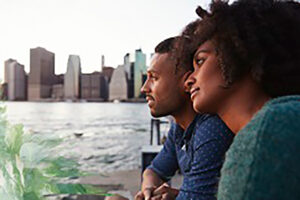 It had been a long day, and as I headed home from work in my car I felt blue and very discouraged.  I was feeling blue because the night before I allowed my girlfriends to talk me into yet another try at going out to one of those new clubs where all the brothers of “high caliber” hung out.

As I drove along, I thought about how lousy the evening had been, and how I had wasted money buying a new outfit for another excursion into boredom. Though the place was filled with “the beautiful people,” they were mostly women.  The few guys there looked prosperous, but I saw no one who appealed to me.  It was also very apparent that no one saw me.  I nursed the same drink for over an hour, as I sat hoping that someone would ask me to dance.  But no one did and I left there feeling dejected, rejected, and most of all unattractive.

I hadn’t been on a date in over a year, and I was beginning to doubt my appeal.  When I stopped at a red light, I glanced in the rearview mirror in hopes of banishing the thought, and my reflection made me feel worse. My hair was wild and windblown and my makeup faded.  I decided to stop at the local supermarket to buy my favorite treat of Haagen Daaz ice cream to cheer myself up.

When I entered the store I heard live jazz music and saw a large crowd gathered around a group of musicians near the deli department.  The music sounded great and succeeded instantly in lifting my spirits.  I decided to stop and enjoy it, because I was in no hurry to go home.

As I stood listening to the music, a hand touched my shoulder from behind and I was surprised to see one of the new clients I had been in a meeting with earlier.  My boss and I had met with him and his two associates over lunch, and he had stood out because he was so good looking.  In fact, I had been so struck by his looks, I found it difficult to focus during the meeting.

When I saw him standing behind me with a big grin on his face, my heart leaped in my chest.  We exchanged small chit chat for a while, as we enjoyed the music, and then suddenly he asked if I had plans for the evening, and I quickly told him no.   He asked if I believed in being spontaneous, and I told him yes.  When he invited me to join him for dinner at a nearby restaurant, I was surprised.  I didn’t understand why he would be interested in someone who looked as undone as I did, but I was flattered by his offer.

As I followed him in my car like a magnet was tied to my front wheel, I couldn’t believe how things happened so fast.  I ended up having one of the best evenings I’d had in a while.  It turned out that he had been just as taken with me in the meeting as I had been with him.  He also turned out to be separated from his wife, but I felt beautiful once again and desired, though our brief encounter only lasted a night.  I was lonely, but I wasn’t desperate.

However, the experience was a great lesson for me.  I learned that the tide can turn in a flash, and you should never let your current circumstances dictate your mood or your state of mind because no one knows what’s around the corner. This incident also gave my confidence the boost it needed and served to remind me that you never know how someone else may view you.