Story Of The Week – The Elevator Encounter 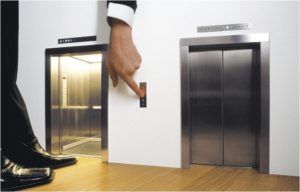 Some things are meant to be and I am now more convinced than ever.  Several months ago, I went on a job interview, and it was my third interview that day.  I was going through a serious transition in my life.  I was getting over a divorce and trying to cope with losing my job after ten years because the company was relocating out of state.

The first two interviews had not gone well, meaning I had not left feeling that I had been impressionable enough to be considered for the positions.  Therefore, by the time I arrived at the third interview, I was psyching myself up to be positive, though I was beginning to believe that day was not my day.

And as it turned out, I was right.  As soon as I stepped through the door to the office of the person I was interviewing with, I was told by the receptionist that the meeting had been canceled because the interviewer had been called away to another meeting.

After she re-scheduled the meeting for the following week, I stumbled through the door in a daze.  I was not only disappointed, but I felt certain my life was on a downward spiral.  I had little or no money in my purse, and at that moment I had no other prospects for a job.

After he hung up the phone, he tried to calm me by telling me help was on the way, but I was in a tizzy.  Twenty minutes had passed, before I noticed how handsome he was, and learned that he was the guy I was supposed to interview with.  He apologized profusely for having to cancel, and I wound up telling him about my day and my struggle to find a job.  As we talked, he decided to do a “semi-interview” while we waited.

By the time, the power on the elevator was restored, we had been stuck for almost an hour, and my spirits had been lifted.  I was convinced that destiny had arranged the meeting when he invited me to meet him the next day for dinner at a nearby restaurant.   I accepted without hesitation.  It was my first date in three years.  When we met the next day we had such a great time laughing and talking, that he asked me out again.

On Monday, when I went to meet him for the formal interview, he told me he had found a couple of job prospects for me because he was too attracted to me to have me work for him.  The next day, I interviewed with someone he recommended and was hired on the spot.  By the way, we are still dating…