The Boyfriend Hall Of Fame… 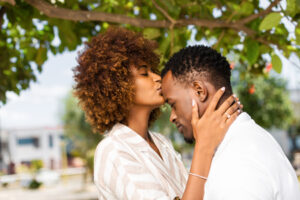 For many single women, there are one or more guys who have crossed their idealized paths and left indelible impressions of love, tenderness, and romance, but some have also encountered enough scandalous behavior from lovers to fill a thick novel.  Here are but a few.  This week, we bring you the good guys

John The Hero – Julia was running out of a dark parking lot after a robber had snatched her purse with her car keys and cashed paycheck inside when John drove by and heard her screaming.  He stopped to help and then drove her to the nearest police station to report the crime.  He stayed with her until she finished the police report and then drove her home.  Two days later, a messenger delivered an envelope to her job from John, which contained a cashier’s check for $1,000.00, which was the amount of her paycheck.  Needless to say, her gratitude evolved into mutual admiration, and they began dating.

Tom The Protector – After dating for three weeks, Sharon was transferred unexpectedly to the night shift at the hospital where she worked.  When she lamented to her new boyfriend Tom, that she was afraid to come home alone at night, because she had no car, he began picking her up every night, though he had an early morning rise for his own job. His commitment to helping her get home safely every night continued even after the relationship ended.

Carl The Thoughtful – When Amanda broke her leg in a skiing accident and had to wear a cast, her boyfriend brought her dinner every night and carried her in his arms every time she had to go out anywhere. He hired a maid to clean her house every week for the 6 weeks she was in the cast.

David The Prince – When Angela was devastated over the loss of her mother to cancer, her boyfriend David sent her on a Mediterranean cruise to help her in her grief.  When she got back home, he had a brand new Mercedes in her favorite color, sitting in front of her door with a big white bow around it.

Hank The Supporter – When Terri finally got the promotion at work she’d been hoping for, her boyfriend Hank, who had always been a staunch supporter sent her five dozen roses.  Later, to her surprise, he picked her up in a chauffeured limousine, when she got off work and took her to a fabulous restaurant for dinner to celebrate.

Bob The Wonderful – Yvonne couldn’t get a babysitter to stay with her seven-year-old twin boys when she got a job working midnights and her boyfriend Bob changed his work schedule so he could stay with her kids at night while she worked.