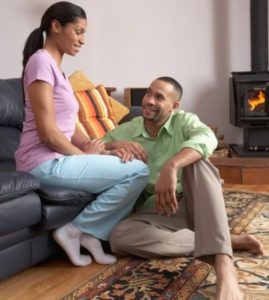 When Terry first saw Mimi, he liked her immediately.  She was cautious, but interested.  His work was cut out for him, but he was ready.  Mimi had just come out of a bad relationship and was not ready to be involved so soon.

But her cautiousness was no match for Terry’s charm and eventually she came over to his side with a willing spirit.  She fell hard as he talked frivolously of marriage one day…and children.

He was passionately in love….or so he thought.  However, four months later, he found himself in doubt, because Mimi was no longer as interesting and spontaneous as she had been before.  For him, the fun in their relationship had turned to responsibility, and he suddenly felt obligated to be with her.

It seemed, she depended on him for her joy and he found it a burden.  He found himself wishing she had other things in her life to make her happy along with him.  But she didn’t.  And slowly he began losing his feelings for her and when he met Samantha, he slipped quietly out of Mimi’s life.

For him, Samantha brought the sun out and climbed for the stars and he was impressed with her zestful spirit.  She was his kind of woman.  And again, he was in love.  However, three months later, Samantha met Harry and walked out of Terry’s life.  Heartbroken, Terry reached out for Mimi…but she had changed her number.