The Dating Chronicles – The New Patient 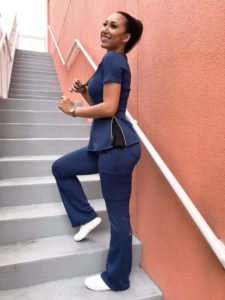 Carla had been hearing about the new patient in 503 all morning.  He was some big shot from out of town, who’d experienced a gastritis attack in a restaurant the night before.  The floor was abuzz concerning his status and his outstanding good looks.  Though his room was not in her care plan, Carla decided to pop in and get a look after she finished her rounds.  She couldn’t wait to see this source of excitement that had the female staff grinning from ear to ear.  Even the nurses from other floors were coming down to get a look.

Carla was giving out her last med when her friend Francie popped her head in the room and beckoned her outside.  “Girl, have you seen the guy in 503 yet?”

“Well honey, you are in for a treat.”  Francie said with a wink.

“He is one of the most beautiful examples of manhood I’ve seen lately.  And he’s rich and he’s divorced.  You’d better hurry up and get in there to get your treat for today!  He’s a sight for exhausted eyes!”

Carla laughed as she waved Francie away.  Francie was known for exaggerating.  But her curiosity increased as she started toward his room.  As she pushed the door open, her stomach began to twitch in excitement.  Her hands felt damp.  He was turned to the window.  He appeared to be asleep.  She walked softly to the other side of the bed, so she wouldn’t wake him.  And when she saw him, she stopped…frozen in her tracks.  He was asleep and his eyelashes were like black Spanish fans spread out over sun-bronzed skin.

She was awed by his appearance, for it was not what she expected.  His features were as if they had been zapped into place by some female genie set out to make the perfect face on a man.  However, she was shocked to see that he was white.  A small detail no one chose to mention.

As she stood gazing down at him, his eyes suddenly opened and looked up at her.  Instantly, a warm feeling crept through her insides as she stared into the most beautiful pair of eyes she’d ever seen.  She felt magnetized as she struggled to break her stare.  “Hi,” she stammered in a faltered voice.  “I just came in to see if you needed something.”  He didn’t answer.  He just stared at her.  She felt like an idiot as she started to back slowly out of the room.   This man has probably heard that question at least a hundred times today, she thought to herself.  I could have come up with something better than that.

When she got to the door, he called out, “Nurse, you could do something for me, if you don’t mind?”  She even liked his voice.  It was deep, but with a gentle quality.  “Sure,” she replied, in a regained professional tone.  He handed her a Bible lying next to him in bed.  “Could you read something to me from this?  It would only take a moment.  The 4th chapter of Proverbs,” he asked, with a sparkling smile.  “Having the Bible read to me always succeeds in lifting my spirits.”

Carla was overwhelmed as she pulled a chair close to his bed.  She was not only astounded by his good looks, but his interest in hearing God’s word had taken his beauty to another level.  Her female senses had been affected by what she’d seen, but her heart had now been touched by what she’d heard.  She opened the Bible and her hands shook as she turned the pages.  If he were Black, she thought to herself, this would be love at first sight.

As Barry lay listening to Carla read softly from one of his favorite passages in the Bible, he marveled at her face.  It was distinctive and her skin was like fine honey.  She was dazzling in a nurse’s uniform that hugged every curve of her body.  He’d seen more beautiful women than the average man sees in a lifetime.  But there was something about this one.

What struck him, were her eyes and what he’d felt when he looked into them.  It was like a connection made between two people who were destined to meet.  He could feel that she sensed the chemistry as well.  He had never in his life been attracted to a black woman, nor had he ever considered it a possibility.  Blacks were not a part of his world.  But as he watched her close the Bible and stare at him from under long umbrella lashes, he sensed that would all change now … if she wasn’t married.