The Dating Chronicles – The Phone Call 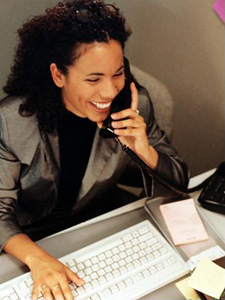 Jan had experienced another wonderful evening with Sebastian and as he drove her home Jan was silent as the music provided a soothing background to her thoughts.  She really liked him, and she was certain he liked her. She wondered if he was seeing anyone else.

Her last “romance” had ended because the guy was also dating another woman and failing at trying to split his time between the two. She didn’t want to go through that scenario again.  Prior to this night, she had been too afraid to ask.

However, she knew that before she got out of the car, she had to know, so she could be free to hope, but in her heart, she already knew the answer. This was the fourth time they’d seen each other and he had yet to ask her if she was seeing anyone, which was usually a tell-tale sign that a guy wanted to avoid being asked.

As they neared her street, her heart began to beat fast as her words struggled to come out.  “Are you seeing anyone else?” she asked trying to conceal her nervousness.  He looked at her as if startled by the question.  He took a deep breath.

He spoke slowly with his eyes focused outside the car.  “As a matter of fact, I am.  But I’m single and I’m certainly entitled to date more than one person if I choose.  However, I hope you don’t have a problem with that, because I really like you.”

Jan had her hand on the door handle when she turned and faced him.  “As a matter of fact, I do have a problem with that.  But I like you as well.  So, if you ever decide you’re interested in maybe pursuing a one on one relationship with one woman at a time…call me.  But until then, I wish you the best.”

When she got out of the car, he called her name, but she kept walking without looking back.  She was surprised at how good she felt about herself.  She’d had enough of competing with other women to keep a guy’s attention.

Two weeks later, he called and left a two-word message on her voice mail.  “I’m interested.”  She waited a week before she returned the call, and the first thing he said to her was…”You win.  I’m ready to try a one on one.”