The Dating Chronicles – The Surprise 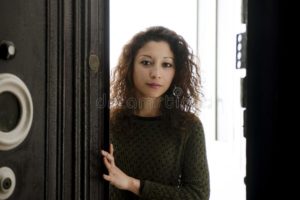 Gena was sorry she answered the door when she saw Shana standing there.  Her friend Shana had stopped by unexpectedly to visit and Gena was expecting her new boyfriend, Nate.  She didn’t want Shana there and she didn’t know how to get rid of her.  They hadn’t spoken in three months, because of a serious disagreement, and now Shana was showing up to apologize.

Gena was nervous and beside herself.  She had only been dating Nate for two months and she was not sure of how he felt about her, and there had always been a sort of competition between her and Shana.  While Gena and Shana sat talking, there was a knock at the door and Gena didn’t move.

“Would you like me to get it?” Shana asked rising from her seat.  “Sure,” Gena said in a low voice.   I might as well get it over with, she thought.  When Shana opened the door, her mouth dropped open.  Gena walked up behind her trying to muster up a smile.  “Hi, Nate, this is my friend Shana,” she said.  “Come on in.”

Nate stood at the door staring silently at Shana with a sheepish look on his face.  “He knows me already,” Shana said quietly, “He’s my boyfriend, too.”  Without hesitation, Gena slammed the door in his face and she and Shana embraced each other in anger and despair.