Story Of The Week – The Power Of The Wait 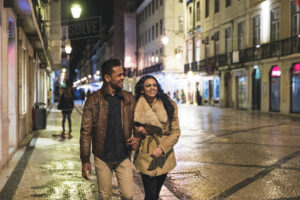 The Power Of The Wait

One morning after a wild night of passion-less sex with an inattentive boyfriend, I realized that I wasn’t sure how he felt about me because there was no real evidence that he really cared.  Suddenly, I knew I was just another sex partner to him and though I wished it were different, in my heart, I knew it wasn’t.

I somersaulted in bed to rule out the unseen competition.  However, too many times I’d catch him whispering to other women on the phone when he thought I was asleep.  Therefore, I decided that day to reserve my body and my heart for the man who would treasure it from that day forth.

At first, it was hard for me to say no.  I wanted to be in love.  Like most single women I wanted to feel wanted and cherished in a relationship.  I longed to share the side of me that revealed itself when inspired by the touch of a man I desired.  However, I was determined to finally put my body on a pedestal and keep it there until the right someone came along with ideals high enough to reach it.

Though it had been a while since I spoke the language that only lovers speak, I was not lonely.  My life was busy with things that could easily be intercepted for love, but I was not over-anxious.  I had been anxious before, to my regret.  However, anger, frustration, and disappointment had taught me that it was best to wait on the right guy and the right circumstances before I gave my “love” away again.

I succumbed too often in the past to a seductive voice and a soft chuckle filled with the promise of a loftier position.  I stopped rationalizing that maybe God had sent those figments of real men who walked through my door, for me to help mold and shape.  I was 40 and had never married because no one had ever bothered to ask.  I assumed it was something about me that was not up to par.

I finally figured out that I had simply made bad choices, and my heart no longer ached from the pain of my decisions.  I became content to wait for destiny to act.

My grandmother used to always say “the lines waiting to be married are usually short for the woman who doesn’t care about the wait…because she already has a life and she’s holding out for Mr. Right.”

For the first time, I became more patient than I’d ever been in my life.  I was content with my current circumstances and wonderfully intrigued with the mystery of God, and His penchant for orchestrating things for me that were beyond my comprehension.  Therefore, I knew I could trust Him to weave together the events of my life for my best.  I refused to go out looking again for a “heart thumper.”  I began to concentrate on having fun, and it changed my “frustrated face” to a joyous grin.

Then it happened.  One day, while running late for an appointment, I ran a stop sign on my way to the hair shop.  I had been cleaning my apartment before I left home and I looked like it.  I had no makeup on and the scarf on my head was tied in haste.  I moaned loudly when a police car pulled up behind me with the siren blasting after I blew through a stop sign.  However, when the officer stepped out of the car, I almost fainted.

It was my girlfriend’s gorgeous brother whom I’d had a crush on since high school.  Unfortunately, he had never spoken a word to me other than “Hi,” since I’d known him, and he had always ignored my stares.  Ironically, when he saw it was me, he chuckled, gave me a stiff warning, and began teasing me about my appearance.  I ended up being even later for my hair appointment as we exchanged flirtatious banter.

He acted as if he was seeing me for the first time, and ended up asking for my phone number.  He claimed he really enjoyed talking to me and that he couldn’t wait to do it again.  He called the next day and invited me to a neighborhood baseball game, and I had such a great time I hated to leave him.

We began dating to the shock of his family and me. I was also surprised, due to his well-known player status, that he was very respectful of my abstinence rule.  When he proposed after two months of dating, I almost fainted.  Now I know what it means to not be anxious for love.  For it’s clear when it’s your time, love will find you no matter where you are in your life or how long you’ve been waiting.