Single Sketches -There Is Love After 50

There Is Love After 50 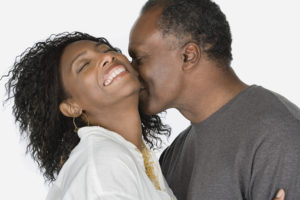 When I decided to do this article, I went in search of women over 50 who had never married but found real romance after 50.  Hopefully, their experiences will inspire those who think when romance has not come to them by a certain age that love has passed them by.  It should also succeed in giving new energy to those who are still waiting to experience that which they have not.  That prince of a guy.

Diana – married for the first time at age 51.  She met her husband in the supermarket.  They got to talking about the high price of avocados in the vegetable section and bumped into each other again at the checkout counter. They exchanged numbers and began dating immediately.  He was 53 and a retired Marine captain.  She was an elementary schoolteacher, who had given up long ago on ever finding real love.  He was a divorced father of two, who vowed to never marry again.  After six months of intense dating, they were married on her birthday.

Mara – was a 53-year-old grandmother who never went anywhere, but to work and back.  She married for the first time after meeting her prince in the lobby of the building where she lived.  She was waiting for her daughter to pick her up and he was the new doorman on duty.  It was snowing heavily that night and her daughter got caught in a traffic snarl.  She ended up sitting in the lobby for over three hours talking to him while awaiting her daughter’s arrival. They became friends than lovers and married five months after meeting.

Joan – 52, decided one night to do something she’d never done…go to a movie alone.  She was bored and tired of looking at television night after night.  In the darkened theater, a very handsome man sat alone two seats from her and began commenting to her on the various scenes in the movies. At first, she was apprehensive about talking to strangers, but after a while, she began to enjoy his comments.  When the movie ended, he asked her if she’d have a coke with him in the lobby and she eagerly accepted the invitation.  He was a 58-year old widower who owned several car service franchises. They met again in the same theater two nights later and began dating.  They married two years later.

Helen – a 52-year-old registered nurse met Mr. Right at an amusement park.  She was standing in line waiting to go on one of the fastest rides there and he was standing behind her in line.  The wait was long, so they got to talking and discovered they had gone to the same college and had mutual friends.  He was a 55-year-old policeman, who was recently divorced.  They exchanged numbers and began dating.  Three months later, they were married at the same amusement park.